The organic catalyst TEMPO free radical(2,2,6,6-tetramethylpiperidine-1-oxyl, 2564-83-2) is a kind of free radical with high stability and high activity, and can complete highly selective reactions under mild conditions. In recent years, the use of TEMPO as an oxidant has become one of the most important methods for oxidizing alcohols to aldehydes.

When TEMPO in the form of oxygen ammonium salts, it can be used to oxidize alcohols.

Here is a easy way to prepare oxygen ammonium salts. 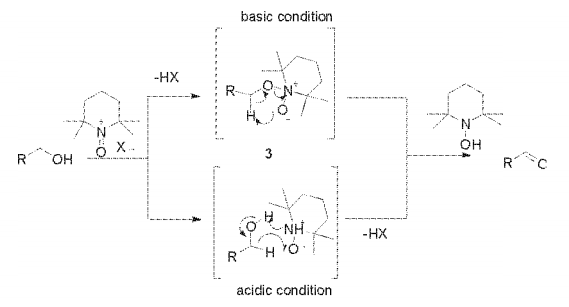 The oxidation of TEMPO can be highly selective, which brings a lot of benefits. We can easily choose to oxidize primary alcohols or secondary alcohols by changing the reaction conditions. It has been proven that secondary alcohols are more likely to be oxidized by TEMPO+ under an acidic environment. That’s because secondary alcohols are more easily to provide an H- ion when in an acidic environment. And when under an alkaline environment, TEMPO+ undergoes a nucleophilic addition reaction with the proton-losing alkoxy anion, and then decomposes to produce the corresponding aldehydes, ketones and TEMPOH(not 4-Hydroxy-TEMPO or TEMPOL). It is clear that the chemical selectivity of TEMPO+ depends on the p H value of the environment. The four methyl groups of TEMPO+ have a shielding effect on nitrogen atoms, so the electrophilicity of the nitrogen atom is weakened by the four methyl groups, resulting in the reaction rate of primary alcohols is faster than secondary alcohols.

The core of green chemistry is the “atomic economy”. If we can reduce the dosage of TEMPO from stoichiometric amount to catalytic amount, we can make the reaction accord with the “atomic economy” principle. As a mild oxidant, TEMPO can oxidize alcohols to aldehydes and ketones under an acidic or alkaline environment. In order to reduce the consumption of TEMPO, it is necessary to add another co-oxidant to continuously oxidize TEMPO to generate TEMPO+ salts again. And a variety of catalysts have been proven to implement the oxidation of TEMPO. Take bromide as a example, we can use DCM as solvent and add bromide as a co-catalyst, which can make the reaction more moderate. TEMPO+ salt acts as an oxidant to oxidize the alcohol to aldehyde or ketone, which is reduced to TEMPOH. Hypochlorite oxidizes the bromide ion in the reaction system to hypobromite ion, generating hypobromite ion and then oxidizes the reduced TEMPO+ salt (TEMPOH) and make it continuously regenerate.